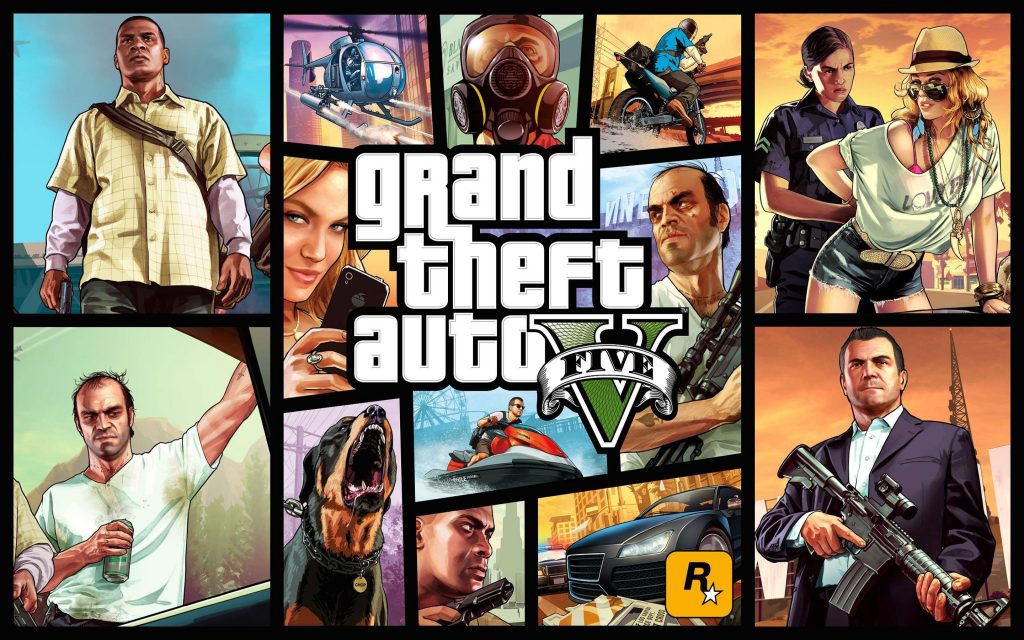 There’s a rule in cinema about escalation. Every time you repeat something, it has to be bigger, a new element has to be brought in. GTA V feels like the ultimate escalation in the Grand Theft Auto formula. I’m going to be writing this review from a first played perspective, rather than how its changed from the console versions, so bear with me if this says some things you might already know. If you want to check out PC performance and how well its been going, head towards the bottom.

GTA V presents itself in a colossal-sized rendition of Los Angeles county, and just how GTA IV was heavy a satire on New York, Rockstar feels like it gave LA a loving kick in the nuts. This isn’t just placing landmark buildings in the map, this is LA culture. People are obsessed with the environment despite the dirtiness of the city, obsessed with yoga that they get very pretentious about, and the tourists want to find the used underwear of celebrities in their garbage bins. As someone who actually lives in this city, its almost uncomfortable how well it depicts it. I’ve been a long fan of Vice City, and it was, for a long time, my favorite GTA city and maybe even game, but we are talking about a map so massive in scale, I have yet to come close to seeing the entire map despite having played it nearly 35 hours this week. Writing continues to be the highlight, both in the cutscenes and random dialogue, but again the radio stations are impressive, with a massive song collection and the usual hilarious writing. 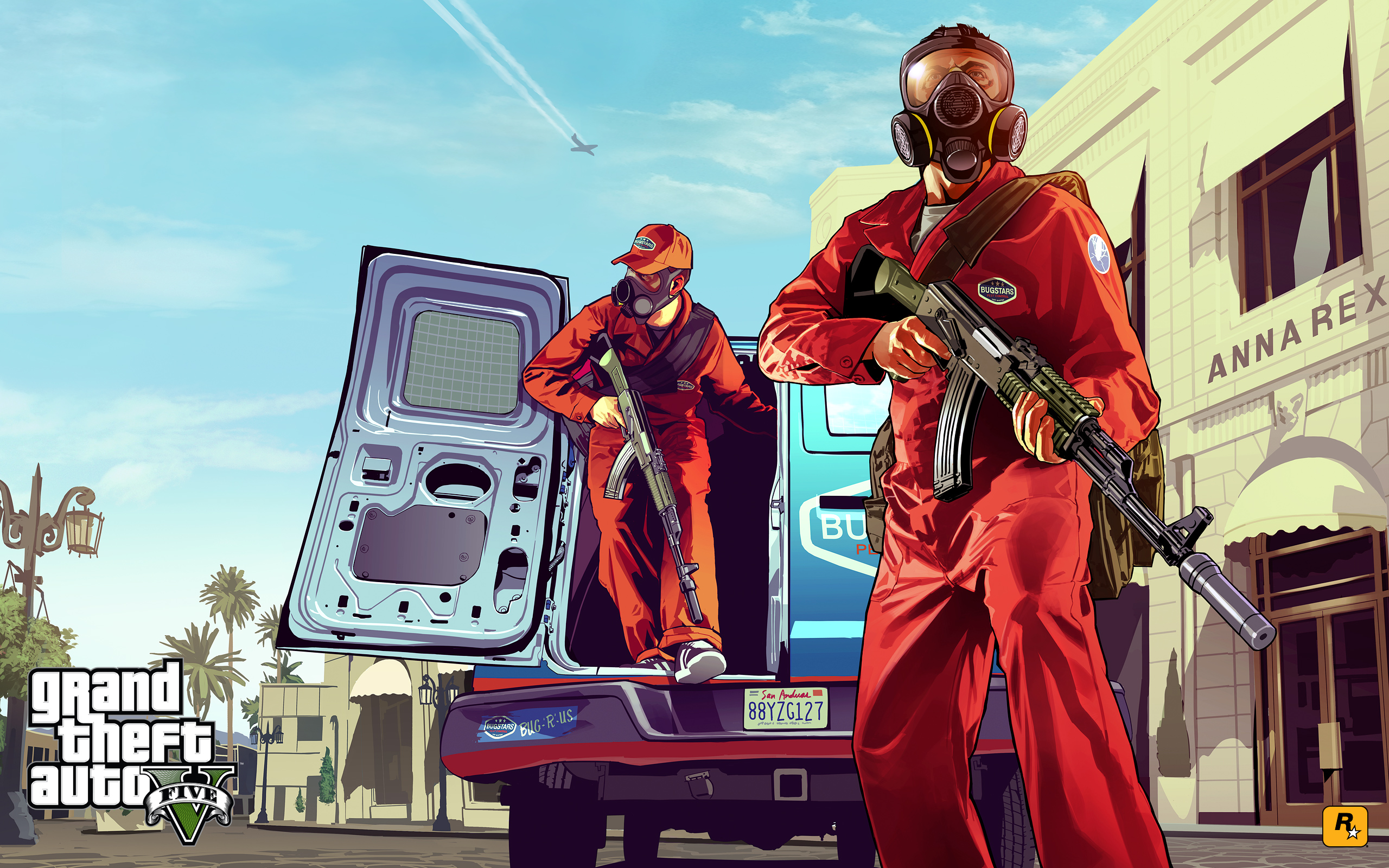 Starting with the single-player, this time around you have three protagonists, which from a storytelling standpoint allows 3 unique perspectives on the story, as well as having extremely different personalities from each other. You can switch by the three as you please, and in some missions, you jump from player to player to help each other out. The downside here, at least from my perspective, is that GTA V goes away from the ‘anti-hero’ rhetoric that the previous games had. Niko Belic was a killer sure, but he had charm. But it’s hard to relate or identify with the 3 protagonists in this game. It is a fresh perspective, but you won’t find yourself caring about what happens to them, rather, you are just wondering about what the next big set piece is. One thing to note is that the RPG elements from San Andreas are back, but a bit more simplified. There are levels for shooting, driving, stamina, lung capacity, stealth, strength, and flying. Each character has their own stats, as well as a special ability that you can activate when a bar is full. Trevor goes on a rampage with his guns, Franklin can do advanced driving maneuvers, and Michael can slow downtime. There are some things you have to keep in mind, however, as each character has their own wallet and inventory, so if you unlock the sniper rifle at Ammu-Nation, you have to buy it with each character for them to all have it.

There is also a massive amount of collectibles to keep you busy outside of main missions, as well as smaller activities such as yoga, golf, tennis, hunting, doing drugs, and many more, that can be unlocked upon meeting random people around the city. There is also a huge amount of collectibles such as stashes of weed, celebrity photos, packages underwater, and more. You can also trade stocks on the stock market, which are affected by the missions you complete. Just took out the CEO of a pharmaceutical company? Hope you bought several thousand shares of their rival’s stock. Even upon 100% completion (which will take you a very long time) there is an ongoing conspiracy to figure out involving UFO’s that the internet has yet to solve. There is a large number of ways to make money and you are going to need it, since the purchasing properties system from Vice City is back, and there are some properties that cost in the millions. Now, this brings us to the big set pieces of single-player, the heists. You get to choose your way in as well as the crew, and you have to complete some small tasks to get the equipment you need to pull it off. This follows the escalation method I talked about, where you start off robbing a jewelry store, then the next thing I knew I was playing up a ship to steal a nuclear device which I went to pick up with a submarine. 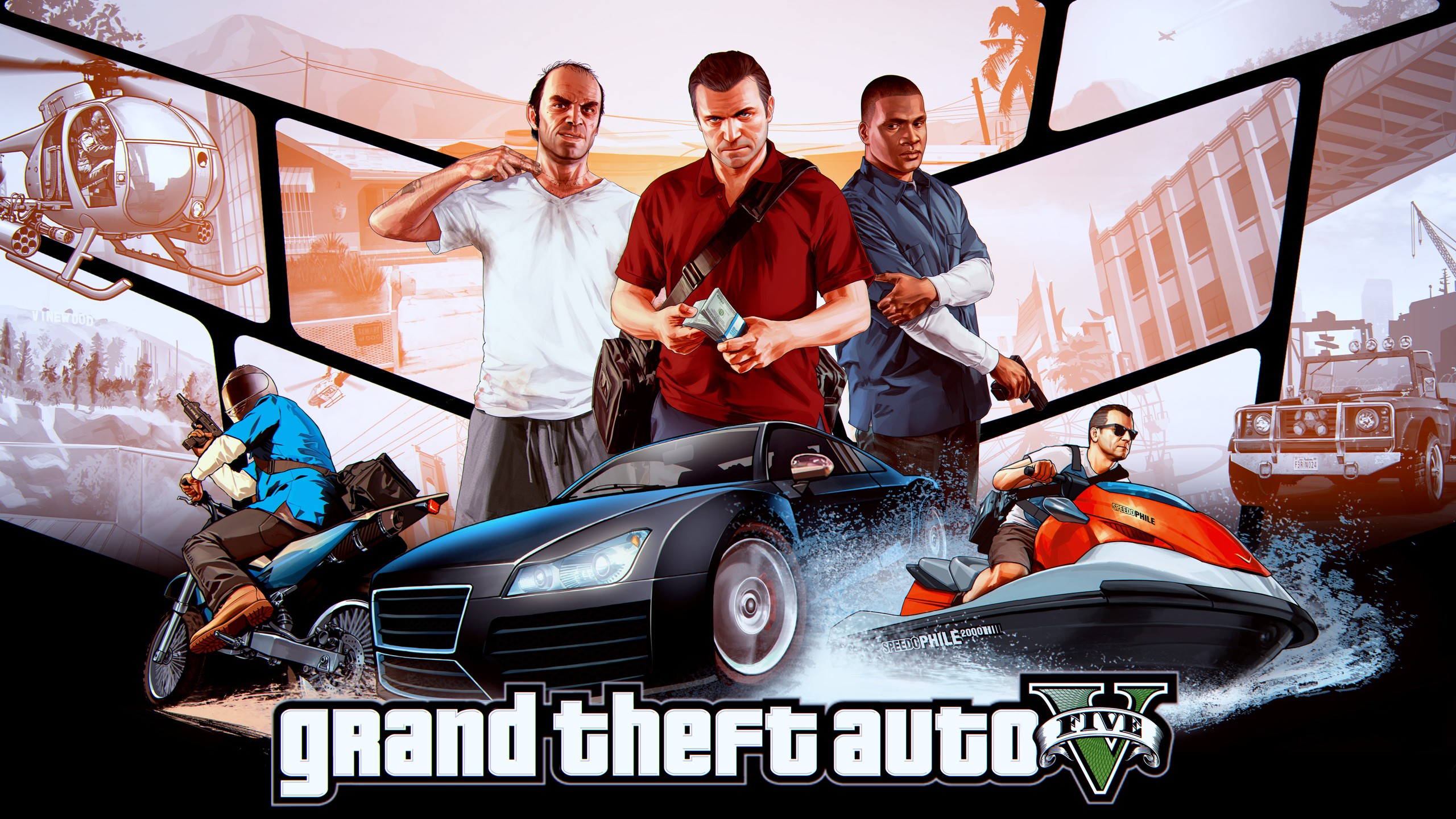 Even after that massive campaign, which you can easily spend 60-80 hours on, you still have GTA Online. After creating your character and completing a quick tutorial you are plopped into the same city with up to 30 people to do as you please. You can simply free roam or complete missions similar to the ones in single player but co-operative, or you can be competitive and race vehicles, play a deathmatch, go skydiving and more. Completing missions for your contacts unlocks more contacts and better-paying missions, and you level up your character allowing you to buy more clothes, cars, and guns. For big purchases, you can buy your own apartment with a huge garage, as well as nice cars, planes, helicopters or boats. If you pre-ordered the game to get the bonus cash then you likely picked up a nice apartment straight away, otherwise its a long grind to get one in order to obtain one with a heist room for online heists. These 4 player heists aren’t as scripted as the single player ones, and the setup missions to get the equipment you need are often so big they can feel like heists in themselves. Just as with the single player, despite all of the hours I put in I still feel like I have only scratched the surface on the possibilities. To prevent people from just running around shooting non-aggressive people , there is a ‘mental state’ system that shows how aggressive you are towards police and other players. Players who don’t shoot around randomly are white on the radar, while players who run around doing killing sprees show up as red, and of course there are many shades in between. You can call for bounties to be placed on players as revenge and eventually be able to call in mercenaries or muggers on them as well.

For the video people around there is also an in-game video editor along with director mode, allowing you to instantly capture clips of game play without the need of extra software or to place characters as you please and, well, direct them to do as you want while you roll the camera. Admittedly, I have yet to mess around with this mode in great detail. But its icing on the cake, and anyone who is a fan of machinima would find a gold mine in this feature.

So that sounds great, you might say, almost perfect! Well it could be, and down the line it can, but as with every release there is nowadays it is not without problems, most of which are with online mode. But for issues that deal with both, some people had issues launching a game, as well as dx_error crashes. Some crash when alt-tabing out, and some get the occasional glitches. The iFruit companion app that the game initially nags you to use that creates custom license plates, trains your dog Chop, among other things isn’t PC compatible yet, and joining your friends can cause odd errors and instead of being placed in a populated server with them, you end up in a private server by yourself. Controls for the helicopters feel awkward at the moment, while you can fly them easily, any sort of dogfight becomes a hot mess quickly, and I would recommend turn the sensitivity down all the way if you plan to use it at all. During this week we did encounter one hacker as well. There’s definitely problems, but I wouldn’t go out and say this has been a bad release so far, its more on the C+ level, not great, but not bad enough to be making headlines and to scramble the PR reps. 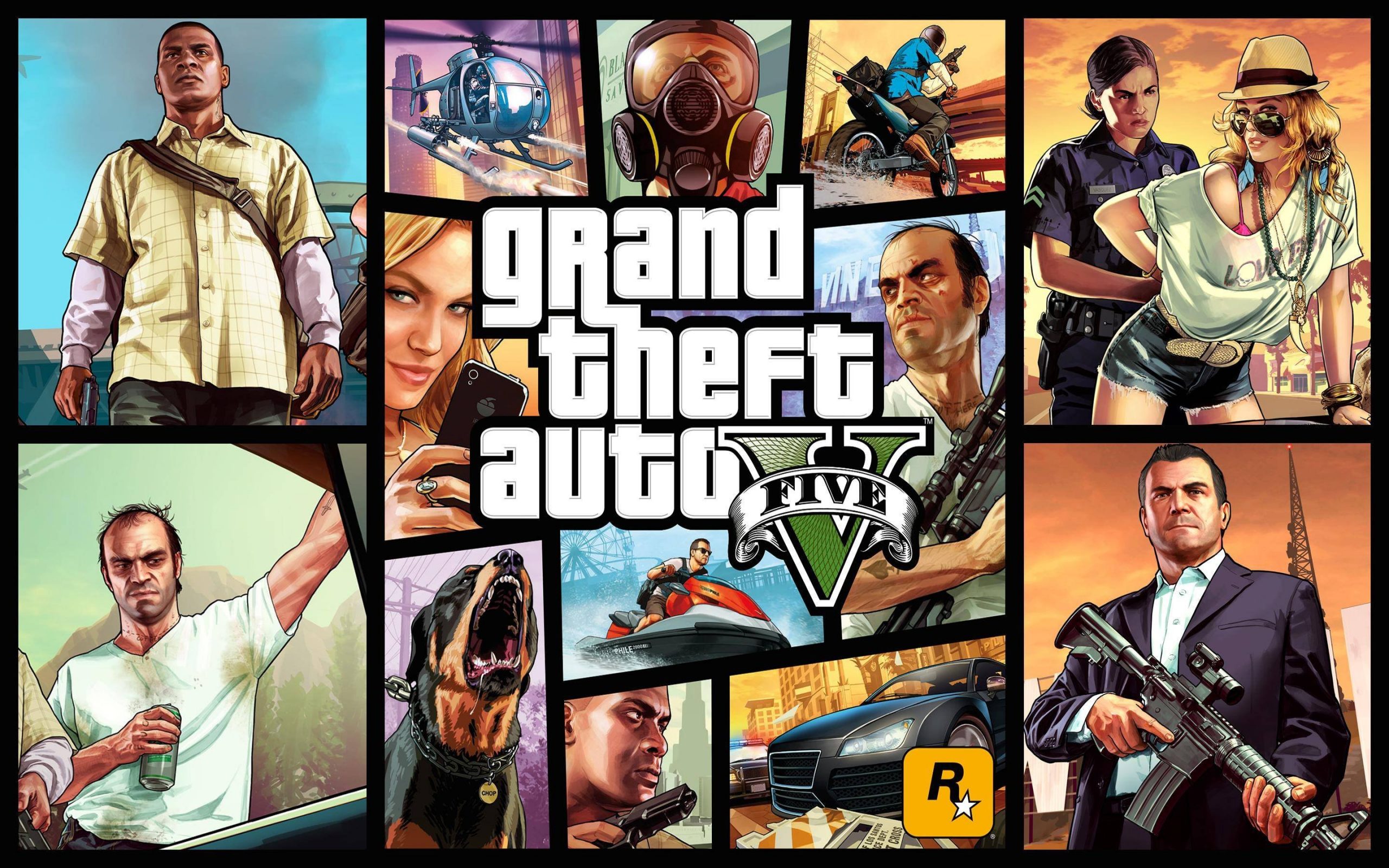 Many of those problems can be fixed down the line, even if Rockstar tends to be on the slower side of the patch releases. There was a 1.01 patch already and while it did seem to fix some issues with launching the game it is accompanied by a couple of other online glitches to hinder progress. So how does it run? Well take in mind my system is a bit powerful for this (5960x CPU and a 980) and it runs very well for me. It can slow down a bit in the northern area of the map at night time with all of the settings cranked up. Most others that have been playing the game have also reported great performance, so unlike GTA IV the optimization and extra time put in the game to make sure it runs well seems like it was worth it. The amount of graphics options are extremely diverse, and even without everything turned to max the game still looks phenomenal.

If you have yet to play this game on any console, then you should. This is a stupendous amount of content that easily makes a satiable price-per-hour ratio. If you’ve played it before, then you have some questions to ask yourself. How much mileage did you get out of online? Do you want to play with DG? (yes) If your answer to those questions is ‘a lot’ and ‘yes’ then you’ve honestly probably already picked it up. But this is still, either way, a must by. 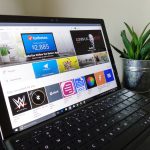 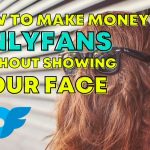